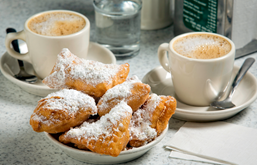 The USA is a gastronomic melting pot of various cuisines. From Italian to Mexican, and everything in between, there’s a wide variety of local foods and dishes on offer to satisfy all palates. Often, it’s a challenge just to know where to begin on the menu and to make sure you sample the best foods to try in a new destination! To help, we have put together our Top 10 recommendations to enjoy from our clients. Forks (or fingers) at the ready!

A rite of passage upon visiting Louisiana is enjoying a Po’ Boy (or two). A highly versatile sandwich, the only pre-requisite of a “traditional” Po’ Boy is the use of “Po’ Boy bread”. Like a baguette in style, Po’ Boy bread is made with less flour and more water, which gives it a softer, fluffier consistency than the French counterpart. The sandwich itself has roots dating back to the 1700’s, but the term “Po’ Boy” was said to be coined initially in the 1920’s by the Martin brothers, who started serving these sandwiches to the local streetcar conductors who were striking at the time. Typical fillings of a Po’ Boy include fried seafood, roast beef, and Louisiana Hot Sausage, and the sandwiches are often “dressed” with lettuce, tomato, pickles and mayonnaise.

TTM Top Tip – Order a fried catfish, fully dressed Po’ Boy from Chris’ Po’Boys in Lafayette for the true Louisiana Po’ Boy experience. It’ll be so good, you’ll want to go back and try more of his 15 varieties of sandwich!

Continuing the sandwich/seafood theme, New England is the place to sample Lobster. In fact, the state of Maine has an annual Lobster Festival, which takes place in the small coastal town of Rockland every August. It’s therefore unsurprising that Lobster is a staple part of every New Englander’s diet. A simple way of serving up Lobster is in a hot-dog style bun, with a bit of butter, lemon juice and seasoning. The origins of the Lobster Roll don’t begin in Maine, however, the story starts with a restaurant called Perry’s in Connecticut serving them up as early as 1929. However, this was popularised in the 1970’s by establishments such as Red’s Eats, a Maine eatery.

TTM Top Tip – Head to ClamShack in the small Maine town of Kennebunk, who have won several awards for their fresh Lobster Rolls. Established in 1968, this small eatery is a literal shack on the edge of the Kennebunk River. Enjoy with a freshly squeezed glass of Lemonade!

Coming in from left-field is this Tennessee offering. Created in 1912 in Nashville, the Goo Goo Cluster is considered the first combination candy bar ever created, meaning that it contained several variations of candy, outside of just plain chocolate. The bar itself is a roundish mound of caramel, marshmallow nougat and peanuts, confined in a chocolate exterior.  Times have seen variations of the original cluster appear, such as the Peanut Butter cluster, which replaces the caramel and nougat with peanut butter, and the Pecan, which replaces the peanuts with pecans. As for the name of the bar, it’s said that the creator of the bar, Howell Campbell, was struggling to come up with a suitable moniker for his creation, until having a conversation with a school teacher on a streetcar, who suggested that he name it after his infant son’s first words: “Goo Goo”. The accompanying slogan? “Goo Goo! It’s so good, people will ask for it from birth”. The cluster had a long-standing partnership with the Grand Old Opry (GOO), which is where some people think the name came from, but the bar predates the famous music venue by 13 years.

TTM Top Tip – The flagship store for the Goo Goo Cluster is still in Nashville and will be opening a new experiential storefront in September 2021. The new Goo Goo Chocolate Co. will offer interactive classes, a design your own confection station, a full-service chocolate bar, and retail shop. The Chocolate Bar will serve premium chocolates, wine and whiskey pairings, boozy milkshakes, and a rotating selection of seasonal treats.

Forgive the vague entry, but when it comes to North Carolina, barbecue is king. Lexington has its own Barbecue Festival, held every October, and is constantly ranked as one of the best barbecue spots across the USA. What makes Lexington stand out in the barbecue scene? Its own unique style of barbecue, of course. Whereas “Eastern Style” barbecue involves a vinegar and pepper-based sauce that is applied after cooking, “Lexington Style” incorporates tomatoes and other spices that give their sauces a deep red colour and unique flavour. There’s also a difference on the parts of the pig used, with Lexington Style primarily using only the pork shoulder. Even the accompanying coleslaw is different, with the Lexington Style sauce replacing the more commonly seen mayonnaise in recipes. However, both styles are readily available across the entirety of North Carolina, so perhaps try both and see what side you come down on!

TTM Top Tip – Want to dine like a President? Whenever former US President Barack Obama is in town, he makes a beeline for 12 Bones in Asheville. They don’t stick to one style of barbecue, preferring to draw influences from all over the country to produce the richest, freshest barbecue possible. And after all if it’s good enough for a President…

The food that almost sounds like a dance, if you’re taking a tour with Maverick Helicopters to Hawaii, then once on the ground you need to sample one of these. The traditional Loco Moco, as created by a bunch of teenagers, who gave suggestions to the proprietors of the Lincoln Grill in Hawaii, consists of white rice topped with a hamburger patty, a fried egg and then brown gravy. To give their creation a name, the boys chose “Loco” a Spanish homage to a member of their group, who was nicknamed “Crazy”, and “Moco”, because it “rhymed with Loco and sounded good”. Simple, eh?

TTM’s Top Tip – Da Kitchen’s Loco Moco’s were so good they made their way onto an episode of Man V Food. After temporarily closing their stores due to the COVID-19 pandemic, they have now reopened as part of the Piko Café in Kihei, in Maui County.

For those with a sweet tooth, this entry is the one for you. Since colonial times, New Englanders have enjoyed a dessert called American “Pudding-cake pie,” but in 1855, when the Chef at Parker House, in Boston, drizzled chocolate icing onto sponge cake filled with vanilla custard, something new and sensational was born. Originally dubbed “Parker House Chocolate Cream Pie,” Boston Cream Pie became an immediate and perennial hit. So much has the dessert had an impact on the psyche of the people of Massachusetts, it was declared the official dessert of the state in December 1996.

TTM’s Top Tip – The Parker House is still open and taking orders for their original Boston Cream Pie. Trust us, you won’t be disappointed!

Such is the proximity of the region of New England to the coastline, seafood is in abundance in the area. Oysters play a large part in New England cuisine, with oyster farms often having restaurants attached to ensure the freshest catch around. In most establishments, “Raw Bars” are a feature of the menu, offering various oyster offerings, with the clue being in the name. Purists will tell you, oysters are best served raw, with only lemon juice or cocktail dressing as an accompaniment.

TTM’s Top Tip – Mantunuck Oyster Bar in Rhode Island is one of many fresh oyster restaurants across New England. Originally starting life as an oyster farm, owner Perry Raso purchased the run-down restaurant that was attached to his farm dock in 2008 and reopened the venue with the help of renowned oyster chef Jeff Cruff. Together, they specialise in farm-to-table cuisine, with organically grown, locally sourced vegetables and produce taking prominence on the menu alongside the fresh oysters from farm.

No prizes for guessing who this sandwich was named after! It is said that the King used to consume these sandwiches at an extortionately high rate, which is unsurprising, if a little unforgiving on the waistline. The original “Elvis” was said to be peanut butter and sliced banana, served on grilled Hawaiian bread. However, many variations exist to which Presley is said to have also consumed, including the addition of grilled bacon, jam, and in some cases, honey. A Memphis staple, many restaurants now serve their own variation in homage to the King of Rock n Roll.

TTM’s Top Tip – While you can purchase these at the café of Elvis Presley’s home, Graceland, the best spot to order one is at Memphis’ oldest café, the Arcade. You can order your “Elvis” with or without bacon, and even look at where Elvis used to order his own, located conveniently next to a discrete side exit, so he could come and go without being disturbed by the press.

A breakfast staple in New Orleans, the beignet was brought to the city in the 18th century by French colonists. Quite simply, choux pastry is deep fried, then served with powdered sugar on top. The key to a great beignet is freshness. They should be prepared and fried to order, as to be served hot and fresh. Sometimes, accompaniments include bananas, plantain, or berries. Simple, effective, and the perfect way to start a day!

TTM’s Top Tip – Head to Café du Monde, a café which traces its roots back to 1862 and has remained a staple of New Orleans life since. There are now 10 locations dotted around the New Orleans city, with the “original” being on Jackson Square. Have your beignet, served in three’s, with a cup of café au lait for the authentic breakfast experience.

Fried green tomatoes is an iconic Southern dish, however, North Carolina has its own twist on the dish with a few different versions to try. Several combinations can be found across the state, including our favourite with the addition of pimento cheese. To prepare the dish, chefs will take unripe, green tomatoes, slice them into quarter inch slices, then cover them in cornmeal and shallow fry them, to create a crisp dish. These are then served with pimento cheese as a side dish for the table. Other batters can be used when frying the tomatoes, including breadcrumbs or plain flour.

TTM’s Top Tip – The Sunny Point Café in Asheville take things a step further and offer their fried green tomatoes in a pecan crust, served in a sandwich. Unique, and delicious!