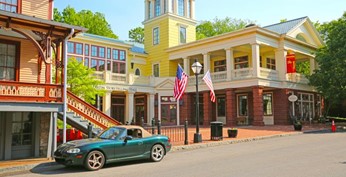 The “American Way” is not always big and bold, there is inspiration to be found by getting off the beaten track.  While bright lights, big cars and bigger personalities may be the standard stereotype, the U.S also offers up plenty of quaint, surprising experiences behind the extra-large exterior.  From tranquil ravines, gorgeous hidden landscapes, and quirky attractions off a quiet backroad, take a look at the more secretive side to the USA below:

New Orleans is a city built on big celebrations, live music and great food, however it’s also got a knack for the weird and wonderful. It is still possible to uncover some secret spots. For example, the pyramid tomb for actor Nicholas Cage that lies in St Louis Cemetery. Nine-feet tall and inscribed with Latin text, this striking grave will be the actors final resting place when he passes away.

For those looking for a unique place to grab a drink in the city, head over to the lesser-known Lafitte’s Blacksmith Shop. Built between 1722 and 1732 (and may or may not have actually been a blacksmith shop) it claims to be the oldest structure used as a bar in the United States. Plus it’s outside of the part of Bourbon Street where most tourists spend their time, so it’s usually much less crowded.

There are countless hidden gems for the curious traveller to discover all across the state of Louisiana. Explore nature walks, culinary landmarks, and cultural treasures that will feed your soul and inspire.  The the folk-art masterpiece Chauvin Sculpture Garden is a whimsical sight that includes colourful Cajun-style artworks that chronicle moments from the artist’s life, and the 45-foot tall lighthouse, made out of 7,000 bricks, is lined with intricate sculptures. There’s a small museum on-site where you can take in Kenny Hill’s (creator) life story while discovering some of the region’s most fascinating folk art examples.

The town of LeCompte is known as the ‘Pie Capital of Louisiana’ and that’s in large part down to Lea’s Lunchroom.  It’s one of the state’s oldest restaurants, dating from 1928 – and legend has it that it’s the last place the historic bandits Bonnie and Clyde ever ate. This small-town treasure serves plenty of savoury fares like baked ham sandwiches and delicious fried chicken, but it’s the homemade pies that draws travellers from near and far. Go hungry and get ready to Instagram your home-style Southern meal.

Maverick Helicopters are known for their iconic aerial tours over the likes of Las Vegas, Hawaii and the Grand Canyon. These global destinations are of course no secret, however when you fly with Maverick you’re sure to get something extra special.

With experiences such as the Wind Dancer guests don’t just take to the skies for unbeatable views, they also get to land in a hidden and secluded area within the Canyon. These private landing spots can’t be reached any other way and are perfectly positioned with no other flight paths operating around them, meaning guests can fully immerse themselves in one of the seven wonders of the world.

Similarly for Maverick’s Hawaii island tours of Maui and Kauai, travellers will be able to soar over the lush terrain of the Garden Isles, taking in unexplored regions of the Hawaii islands. Those who take the Hana Rainforest experience will also land in the heart of the rainforest or a champagne lunch and a chance to roam Maui’s lush valleys. The pilot will provide extensive information about this remote Hawaiian landscape, a land which very few people have ever stepped foot on.

Plymouth Rock might be one of the oldest relics in the U.S, but Massachusetts is home to something even older: dinosaur tracks. Trapped in red sandstone around Holyoke, these footsteps of the first Jurassic Period are some of the oldest ever recorded by scientists. Paleontologists discovered the treads back in 1802, and it is now understood that about 200 million years ago, the Connecticut River Valley was home to subtropical wetlands and lakes. Visit the Trustees’ Dinosaur Footprints Reservation to glimpse hundreds of prehistoric steps of some of the earliest-known dinosaurs, including smaller herbivores and much larger 20-foot-long meat eaters.

For a quirky stop off the beaten track, eagle eyed tourists may spot something peculiar off the picturesque Old Sudbury Road in Lincoln, Massachusetts. About 15 miles west of Boston, from a distance those passing by may be forgiven for thinking they are driving by Stonehenge. However, those objects in the rearview are not stones. They are ponies. Plastic ponies and rocking horses to be exact. Dubbed “Ponyhenge”, the attraction started anonymously sometime in 2010, with a lone horse taking its place by the side of the road. Since then, the collection has grown exponentially, with no horses leaving, and new inanimate equine beings arriving mysteriously. Sometimes, they are arranged in a circle. Sometimes, as if they are competing in some sort of fairground race. All anybody really knows is that they exist, and there is seemingly no stopping them in growing in number…

For the intrepid traveller looking for somewhere remote to wander, then The Bold Coast Trail ticks that box. Located in Cutler, Maine, this trail is about a five-hour drive north of Boston and just across the Bay of Fundy from Nova Scotia and New Brunswick. The wooded trail runs along the edge of the picturesque cliffs that plunge into the Atlantic, and seals and bald eagles can easily be spotted along the way. There are several areas along the route where the trail descends the cliffs to small coves, making it an excellent destination for a day or overnight hike, and for those who wish to do the latter, the cliffs are a fantastic place to set up camp. There are a few official tent sites in the woods off the trail, but there is not much like watching the sunrise over Maine from the edge of a cliff.

North Carolina can boast majestic mountains, intriguing hiking trails, charming piedmonts, and picturesque coastline. However it is what lurks between these landscapes that may surprise some visitors. With a fascinating history and rich heritage, North Carolina is home to some of the best-kept secrets in the United States.

Of all the places a traveller might find the presence of the Russian Orthodox Church Outside Russia, a 7-hectare vineyard in the Blue Ridge Mountain foothills would surely rank among the most surprising. St. Anna Chapel, completed in 2014, was built to honour winery owner Andrey Medvedev’s fellow soldiers who were killed in Afghanistan in 1985. Visitors can enjoy a quiet moment at the chapel and also sip the winery’s Kagor, a sweet Russian Orthodox Communion wine. The winery is southeast of Asheville in a fast-growing wine region.

For a spooky look back at early 20th century living, guests should visit the Henry River Mill. Once a major mill town in 1905, this village in now virtually abandoned as industrial technology evolved and people started to move away. The village was used in the popular film ‘The Hunger Games’ as the setting of poverty-stricken District 12. Today, the ghost town of Henry River Mill is single-handed owned by Wade Shepherd, an 83-year-old man who lives nearby. With a recently completed restoration project, travellers can spend the night in a renovated mill house if they are brave enough!

There is also the enchanting island of Ocracoke, where the inhabitants speak in an Elizabethan English tongue. Native Americans, English sailors and pirates all came together on Ocracoke Island in North Carolina to create the only American dialect that is not identified as American. Hoi Toider, also called High Tider, is completely unique to the island where approximately 1,000 people and mainly spoken by the island’s old timers. It’s a fascinating glimpse into the history of language, just don’t be offended if you’re called a dingbat!

Have an interesting and captivating day at The Tennessee River Freshwater Pearl Farm, the only freshwater pearl culturing farm in the U.S. Started in 1925, the farm began harvesting Tennessee’s state gem. Visitors can go into the showroom to buy a pearl from the farm’s collection, but also marvel at freshwater pearl jewellery from around the world. Within the museum, guests can learn about the harvesting process and then witness it first-hand by taking a tour of the farm. A full tour package includes a presentation from a local diver, the farm manager and a true-Tennessee barbecue lunch.

Travellers can take a trip to Paris, Tennessee for a French twist on a small American town. There is even an Eiffel Tower replica, perfect for a photo op and to confound those expecting more U.S themed vacation shots. The Eiffel Tower in Memorial Park is close to two walking tracks and recreation centres, while downtown Paris is full of antique shops and dining areas. A true French experience would not be complete without a glass of red, so visitors can sip 26 different varieties of wines and stroll the grounds of the Paris Winery. To end the day, kick back and watch the sunset at Paris Landing State Park.

“Tennessee’s Oldest Town,” Jonesborough is an eclectic blend of shopping and outdoor excursions while staying true to its historic roots. Appalachian culture is taken seriously, preserved in museums like the Chester Inn Museum, Washington County/Jonesborough History Museum and walking tours conducted by locals who have a passion for yesteryear. This history is also preserved through storytelling, as Southern folklore lives on in “The Storytelling Capital of the World”. Jonesborough’s past is cloaked in tales of American icons such as David Crockett and Daniel Boone. Visit the three-acre International Storytelling Center on Main Street to learn about the art behind homespun tales, while playing host to the acclaimed National Storytelling Festival each year.