Great Train Experiences to plan for 2021 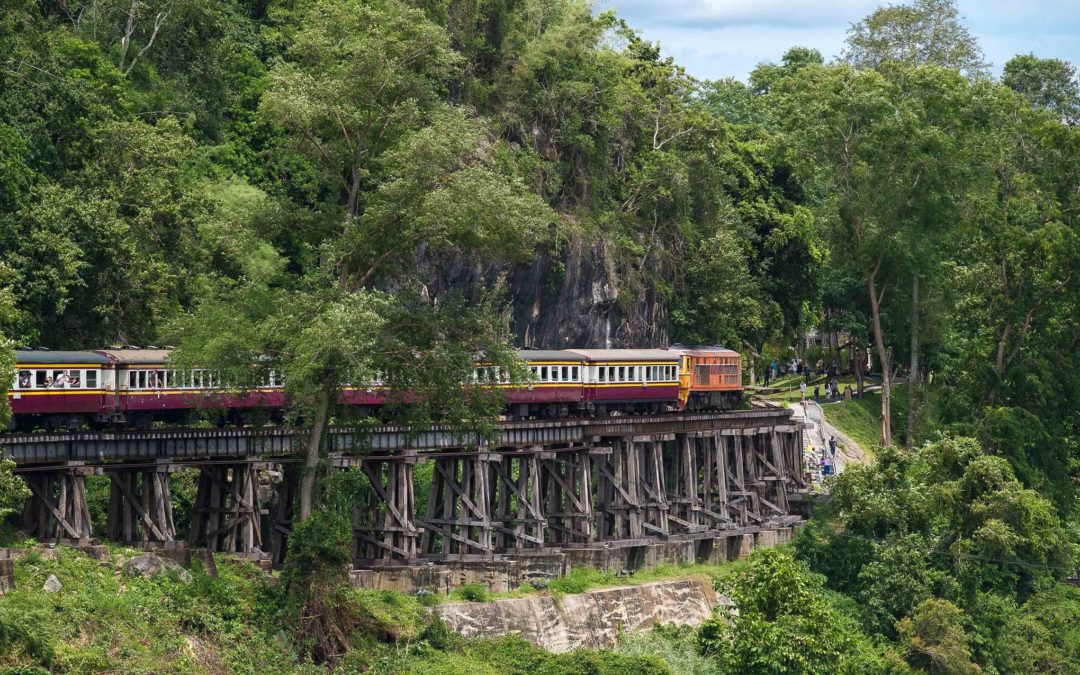 Our passion for trains and rail travel is deep seated, from early memories of Thomas the Tank Engine, The railway Children and Murder on the Orient Express or inter-railing around Europe.  Exploring a destination by rail offers independence, the opportunity for all to enjoy the views, to move around the carriage, stretch out and limit your impact on the environment once you have arrived at your destination.

Above all though, it is the intimate experience of watching the world unfold, sneaking a peak at a constantly changing panorama and viewing a destination from a new perspective that ensures the long lasting popularity of train travel and a love of train experiences and museums.

Below are some of the best ways to experience the destinations that we represent by train, and some of the great historical sites connected with train travel of the past.

In New Hampshire, the more than 150-year-old Mount Washington Cog Railway is the world’s oldest mountain-climbing railroad. Expect fantastic views as the engine huffs and puffs up a 3-mile-long trestle on North America’s steepest railroad tracks to Mount Washington’s 6,288-foot summit — the tallest mountain in the northeastern U.S.

In Connecticut, the 2½-hour journey aboard the Essex Steam Train & Riverboat combines a train ride with a boat trip on the Connecticut River, starting and finishing at the historic 1892 Essex Station.

Dining on an antique train is like something out of an Agatha Christie novel. In Rhode Island, the Grand Bellevue Dinner Train recreates the Golden Age of Rail on a journey along scenic Narragansett Bay. In Massachusetts, the Cape Cod Central Railroad offers lunches, brunches and elegant dress-up dinners on a run from Hyannis to the village of Buzzards Bay, through Sandwich, the oldest town on the Cape, and crossing the Cape Cod Canal railroad bridge

For Real Train Enthusiasts, In Maine, check out the Maine Narrow Gauge Railroad Company & Museum in Portland; the Boothbay Railway Village; and the Sandy River & Rangeley Lakes Railroad, a two-foot gauge railroad that dates back to 1879. In Kennebunk, visit the Seashore Trolley Museum, the largest and oldest museum of mass transit.

Explore by Rail in Massachusetts

Amtrak is an easy way to include Massachusetts in an East Coast USA holiday.  Convenient Amtrak service, featuring high-speed Acela Express and the Northeast Regional train from Washington, D.C.; Philadelphia; New York; and New Haven, Connecticut, provide a fast ride with wide, comfortable seats and all the charm of scenic New England just outside your window.

The Downeaster departs from North Station in Boston and makes several stops in southern New Hampshire and southern Maine on its way to Portland and Freeport.

In Boston, The T runs daily service on buses, boats, trains and trolleys throughout Boston and surrounding towns. Stations can be identified by a black T on a white circular sign:

Purchase fares on a CharlieTicket with cash, debit or credit card at fare-vending machines in any station or aboveground trolley stop.  It costs $2.25 to ride the subway, trolley, or Silver Line 1-3 and $1.70 to ride the bus with a CharlieCard. More information on public transport in Massachusetts: https://www.massvacation.com/navigate/transportation/

Stay in the Chattanooga Choo Choo

The Chattanooga Choo Choo Hotel is a destination experience and beacon of history located in the heart of downtown Chattanooga, Tennessee.

The Terminal Station was saved from the wrecking ball by a group of local businessmen who were inspired by the theme of the “Chattanooga Choo Choo.” With its listing on the National Register of Historic Places in 1974, the Chattanooga Choo Choo Historic Hotel is considered one of the city’s first historic preservation projects. The Choo Choo is still going strong, providing travellers with beautiful and comfortable accommodations in unique Pullman Train Cars and traditional hotel rooms.

Visitors to Chattanooga can ride the world’s steepest passenger railway up historic Lookout Mountain.  The Incline Railway is a funicular railway system over a hundred years old.  It’s powered by two 100 horsepower winches developed by the Otis Elevator Company. The Incline Railway approximately one-mile long single-track system, except for the passing loop in the middle, allowing both counter-balanced trains to operate at one time.  The Incline’s trolley-style cars climb through the natural beauty surrounding historic Lookout Mountain at a breathtaking 72.7% grade.

Streetcars and Riverboats in Louisiana

Streetcars are a charming and convenient way to experience the many areas of New Orleans. Four distinct lines, each originating Downtown, fan out through the French Quarter and beyond to places you might not otherwise get to see. A one way fare is $1.25 and one, three day unlimited ride “Jazzy Passes” are also available for $3 and $9 respectively.

The Saint Charles Streetcar Line has rumbled down the ”neutral ground” or middle of St. Charles and Carrollton avenues for more than 150 years making it the oldest continuously operating streetcar line in the world.   Vintage streetcars built by Perley A. Thomas Company still run along a 6-mile crescent from Carondelet at Canal Street in the Central Business District through the oldest and most majestic section of Uptown New Orleans, around the Riverbend to Carrollton at Claiborne Avenue. https://www.neworleans.com/plan/transportation/streetcars/

As iconic as the streetcars, the riverboats and paddle wheelers roll down the river in Louisiana, watching city skylines and natural areas slowly pass by from the comfort of your seat. Paddle wheelers and riverboats offer a nostalgic way to explore the area – and one that’s gaining popularity among a new wave of travellers looking to experience a slice of America’s past, when riverboats regularly plied the water carrying both passengers and freight. Today’s Louisiana riverboats are all about fun and exploration, but exactly how you choose to cruise is up to you. At ports of call in New Orleans and other Louisiana river towns, you can hop aboard to see the sights, dine and dance, learn and love, get a taste of river life, roll the dice or just … relax. Most Louisiana riverboats host a variety of tours featuring different themes and destinations. For a full round up visit: https://www.louisianatravel.com/articles/guide-louisiana-paddle-wheeler-riverboat-cruises

A train ride through the mountains in North Carolina

With 53 miles of track, two tunnels and 25 bridges, the Great Smoky Mountains Railroad will take you on a memorable journey through a remote and beautiful corner of North Carolina. Ride into river gorges, across valleys and through tunnels carved out of mountains.  The Railroad offers a variety of scenic, round-trip excursions departing from Bryson City. Trips range from 3 ½ hours to a full day of adventure.

Explore West Virginia in a whole new way during a scenic train ride! Sit back and relax while taking in some of the most beautiful views from across the state all from the comfort of your seat.

The Potomac Eagle Scenic Excursion Train is best known as the bald eagle train, and with good reason: The train travels through a nesting area for the American bald eagle, and passengers on nearly every trip report numerous eagle sightings.

The steam engines of Cass Scenic Railroad State Park once hauled lumber off the mountain to the mill in Cass. Those days are long gone, but the antique Shay locomotives remain, this time hauling passengers up Cheat Mountain to the 4,842-foot high overlook at Bald Knob, where on a clear day you can see into two states. The 4.5-hour round trip also includes a stop at the old Whittaker Station logging camp.

The Durbin & Greenbrier Valley Railroad offers several rides, including dinner trains and holiday-themed trips. For some jaw-dropping scenery, board the vintage New Tygart Flyer, which departs from Elkins and climbs through unspoilt mountain wilderness along the cascading waters of Shavers Fork. The 46 miles ride features mountain grades, an S-curve tunnel and a high bridge crossing. https://wvtourism.com/turn-your-scenic-train-trip-into-a-weekend-excursion/

Located within the Wadi AlQura, a famed and important valley since ancient times, AlUla has long been a place of journey, travel and exploration.

Routes of pilgrimage crossed the landscape of AlUla, as in its ancient past. As well as the Syrian and Egyptian routes, AlUla hosted part of the Aylah passage that connected Madinah to Aqaba in Jordan. Great importance was placed on these journey ways, and they were well maintained for pilgrims with forts, watchtowers and water sources.

Later, the Hijaz Railway followed the same routes and greatly improved the speed and safety of travel. Today, both the Syrian Hajj Road and Hijaz Railway are on the UNESCO Tentative List for World Heritage.

Railway construction began in 1900, reaching Madinah in 1908 and opening in Damascus in 1913. As a result of World War I, the railway’s full 1,300 planned kilometres were never completed.

The Hijaz Railway Station is near Hegra, Saudi Arabia’s first UNESCO World Heritage Site. Visitors will be able to visit the station’s museum to marvel at one of the railway’s impressive locomotives, when the destination opens for tourism in late 2020.