The British link with Massachusetts continues 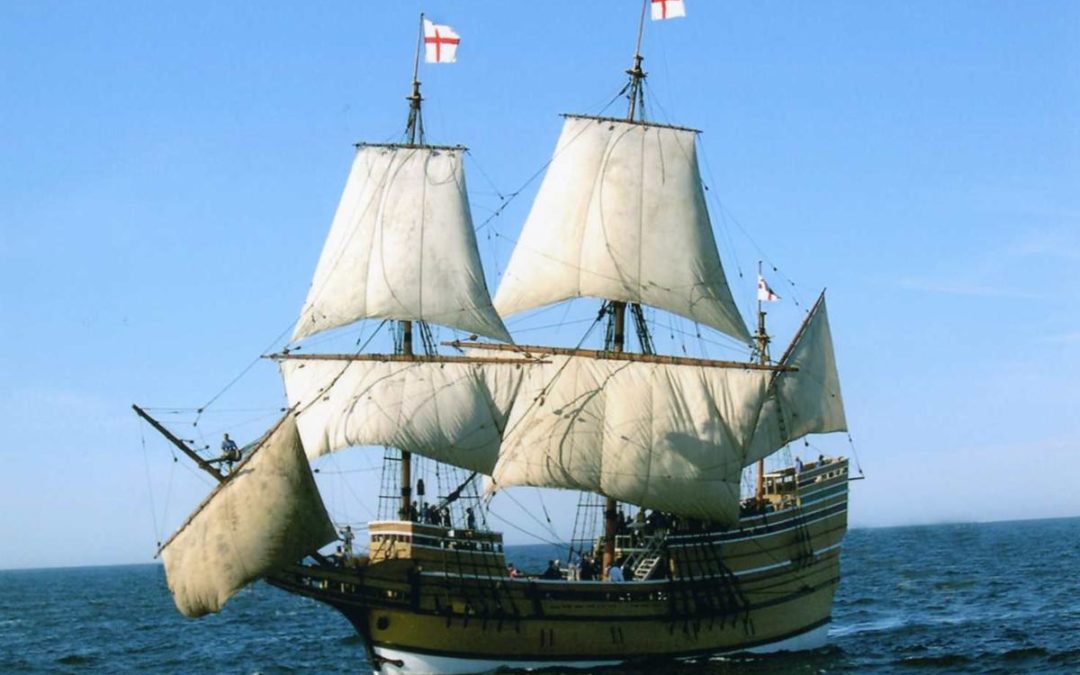 Diaries from a British, Mayflower replica passenger are launching next month ahead of the 1620 commemoration

Peter Padfield, one of the last surviving members of the Mayflower replica crossing in 1957, is launching a new book containing his diaries from the voyage. In 1957 a courageous crew re-enacted the 1620 passage in a replica of the Mayflower with no added technology. Peter Padfield, then 25, was aboard when the ship sailed across the Atlantic from Plymouth in Devon to Plymouth, Massachusetts.

Peter Padfield, now 87 and a leading UK naval historian is publishing his diary from the voyage along with pencil sketches, cine film frames and kodak stills that were taken at the time. It’s a completely unique book and historical record. The official launch will be at Brixham Heritage Museum in Devon, UK on 7th September 2019. The book launches on the same day as the ship being put back in the water after a long restoration.

The Mayflower replica has been undergoing renovations at Mystic Seaport Museum’s Henry B. duPont Preservation Shipyard in Connecticut. On 7th September 2019, Plimoth Plantation is proud to present the official launch and re-commissioning of the Mayflower. An engaging program of speakers and entertainment will set the stage for the ceremonial christening before the ship is lowered into the Mystic River for the first time since her restoration began in November 2016. In the weeks following the launch, the remaining stages of the restoration will be completed, and it will undergo sea trials. The ship will be prepared for a spring 2020 return to Massachusetts.

Highlights from the agenda in 2020

Dominique Kotsias, the UK Account Manager for Massachusetts Office of Travel and Tourism says, “we were really delighted to hear that Peter Padfield is sharing his journal from his voyage in 1957 on the Mayflower replica. What a special thing to do, highlighting this historic event that connects two destinations on either side of the Atlantic. We hope people in the UK will be inspired to visit the Mayflower and will be able to join in on some of events with the Mayflower in 2020 that are happening across the state of Massachusetts”

Peter Padfield’s book is available for purchase via this link https://www.amazon.co.uk/Mayflower-II-Diary-Sketches-Lost/dp/1527244008. Peter will be at the book launch in Brixham Heritage Museum, he will also be joined by 2 other remaining crew members from the journey, apprentices who worked on the ship and Stuart Upham’s daughters (the ship builder) plus descendants of Captain Villiers. To attend or arrange interview with Peter, please email Fiona Padfield on fiona@fionapadfield.com.

In September 1620 there were approximately 102 passengers onboard the original Mayflower, and the crew is estimated to have been about 30. They departed for the New World, in November they landed in what is now Provincetown, Cape Cod and in December they settled in Plymouth, Massachusetts. https://plymouth400inc.org/

Plimoth Plantation is restoring Mayflower, a gift marking the friendship between the United Kingdom and the United States during World War II, to ensure that the ship will continue to educate and inspire future generations. https://plimoth.org/what-see-do/mayflower