Thanksgiving Ideas from our American Clients 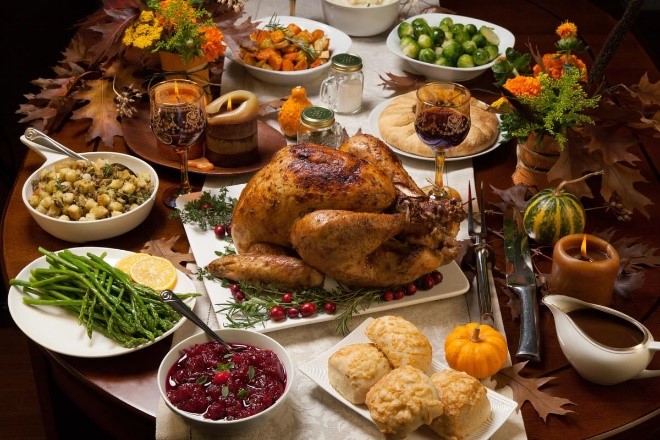 The first Thanksgiving meal, according to lore, took place in 1621, when the Pilgrims and the Wampanoag at Plymouth Colony shared a feast of waterfowl, venison, lobster, clams, berries, fruit, pumpkin and squash. Nowadays, Thanksgiving is celebrated annually on the last Thursday in November (this year falling on the 26th), with families coming together to share a feast only comparable to Christmas in terms of extravagance. With Turkey, potatoes and an array of side dishes piled onto plates, here is how you can recreate a Thanksgiving dinner on this side of the Atlantic, with some inspiration from our clients.

Thanksgiving isn’t complete without a homemade sweet potato casserole and nowhere makes them better than North Carolina – that’s why it is the state’s official vegetable! If you’ve enjoyed a silky sweet potato during the last 40 years or so, chances are good that it was grown in North Carolina, where roughly 70% of all sweet potatoes in the U.S. are produced.

Sweet potatoes have been popular in the American South since the 1700’s when slaves who worked in plantation fields and kitchens mistook them for the yams they knew in their original homelands. Since then they have rightfully found themselves as a staple in the traditional American Thanksgiving feast in one form or another. In recent times, Americans have adopted the sweet potato casserole recipe and topped the dish with both marshmallows and toasted pecans.

If you’d like to find out more or want to cook along at home, check out the recipe here!

Individual family traditions and multicultural renditions aside, the classic Thanksgiving table tends to look pretty similar across America: a giant roast turkey surrounded by mashed potatoes, stuffing, green beans, and, of course, cranberry sauce. Whether you prefer your cranberries cooked with water and sugar into a sauce, raw in a relish, or from a can, when you add cranberries to your plate you’re partaking of one of the oldest Thanksgiving meal traditions!

Cranberries are one of the few native fruits to America and particularly in Massachusetts, which is why the berry has become so synonymous with the state. The cranberry harvest season has become something of a rite of passage for Massachusetts residents with the iconic berry brilliantly and deliciously colouring the landscape of the Bay state. In late autumn in particular, harvest festivals, cranberry-studded recipes and bog tours truly take centre stage.

The sauce is quick and easy to make – and the perfect accompaniment to any roast dinner! Check out the recipe here!

Stuffing is an integral part of a traditional Thanksgiving dinner. Fortunately, the folk in New England take such pride in these matters, that they actually have a stuffing named after them. This came after a 1996 poll where most replies originated from residents of New England, saying they cherished a simple bread stuffing, seasoned — not too highly — with herbs, innocent of garlic, and remarkably close to antique English recipes.

Their stuffing contains onion, celery, parsley, and chicken stock, to help add a subtle boost to the flavours on the table already. Sausage meat is optional and can be added as a meatier alternative! A recipe on classic New England stuffing can be found here.

When it comes to Thanksgiving, it’s all about the main event, the turkey. Well why not go one step further and enjoy a Louisiana family favourite – Turducken! It’s a dish consisting of a deboned chicken stuffed into a deboned duck, further stuffed into a deboned turkey. Outside of the United States, it is known as a three bird roast.

After the main course is finished, dazzle your guests with a rum-soaked pound cake (perhaps using Louisiana favorite Bayou Rum), a cream cheese and chocolate chip bread pudding or stick to the classics with a pecan pie.

The tasty Louisiana treats don’t have to end after the meal is over! Turn your leftover turkey bones into a stock that’s perfect for turkey gumbo that’ll keep you warm through to the new year.

A Thanksgiving dinner in the south is not complete without a cornbread dressing. Its principle ingredients are home-made cornbread, with plenty of onion, celery, eggs, chicken broth, sage and thyme. A classic Tennessee cornbread dressing recipe can be found here.

With all the food on display, Thanksgiving also calls for something to wash it all down. So why not a Tennessee Whiskey finisher? Most tables will have a jug of sweet tea for drinking, but in Tennessee, their tea can be a little different. Made with cola, triple sec, sweet and sour mix and the aforementioned whiskey, it’s a grown up take on a Southern staple. Learn how to create your own Tennessee Tea here.