Sports Stadiums across the States 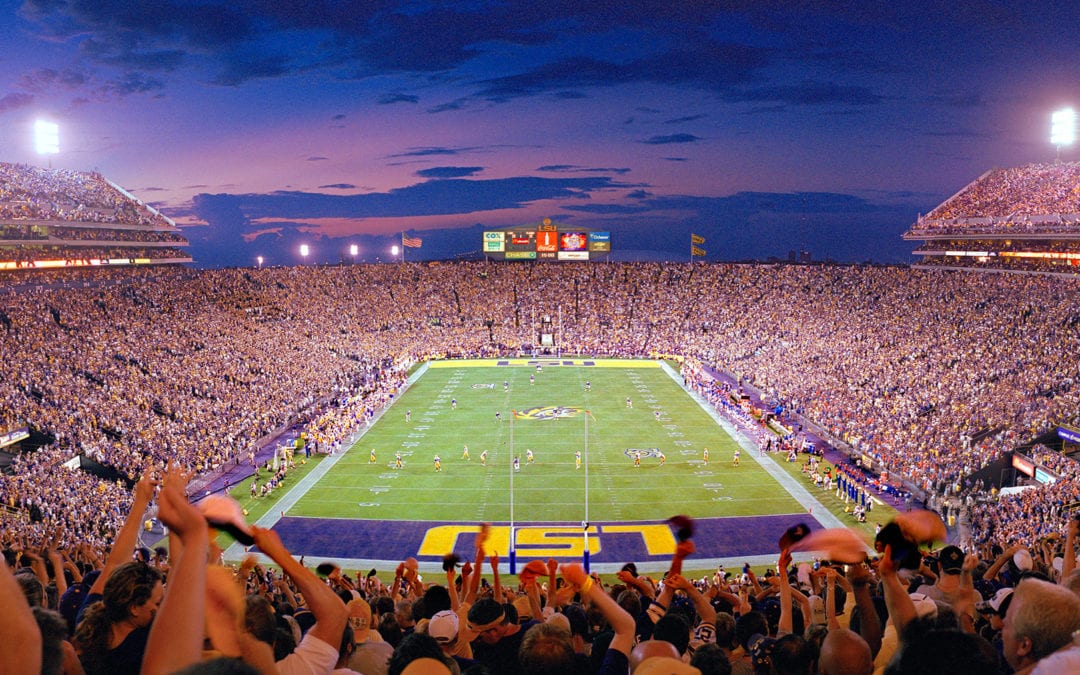 This summer promises to be a festival of sport across the globe. Football could be coming home, with England among three home nations taking part in the Euro 2020 tournament. Team GB will be going for gold at the Tokyo Olympic games. Oh, and there is the small matter of Wimbledon, the Tour de France and the British F1 Grand Prix taking place too. So, despite the weather finally turning warm and sunny, it seems a lot of us will be either glued to our TV screens or trying to catch a glimpse of the action at the hallowed grounds of Wembley Stadium, Centre Court or Silverstone, if lucky enough. While these might be some of the most famous venues across the UK, the USA boasts its own fair share of Stadiums that provide those in attendance with memories that last a lifetime.

The Bayou state boasts a number of jaw-dropping stadiums and arenas where fans gather in their thousands to cheer on their team.

The most iconic is the Mercedes-Benz Superdome, home of the New Orleans Saints. The venue hosts a range of major sporting events, including the Super Bowl and the College Football Championship Game. It’s also home to the famous Bayou Classic Game held each November and the Annual Allstate Sugar Bowl held in January.

There are a number of other stadiums throughout Louisiana such as Cajun Field and Malone Stadium, each equally historic and impressive in their own right. However, if you’re looking for sheer magnitude and atmosphere, a visit to Tiger Stadium is a must. This stadium is the seventh largest in the world holding crowds of up to 102,321 spectators per game. Fans who come to watch Louisiana State Tigers play college football have hit a record 130 decibels on game day, that’s the equivalent of a military aircraft taking off!

Of course, with so many places to catch all the action in the state, it is important to slow down and take it all in every once in a while. A visit to the Louisiana Sports Hall of Fame in Natchitoches is a must do for sports enthusiasts who wants to relive iconic sporting moments, see incredible memorabilia and experience a range of interactive exhibits.

Some inductees are household names, such as Archie Manning and Shaquille O’Neal but others hold equally important spots in the state’s sporting pantheon. New Orleans-born Audrey “Mickey” Patterson was the first African-American woman to win an Olympic medal. The Hall of Fame includes the USA jersey she wore when she won the bronze medal in the 200-meter dash at the 1948 games in London.

The Electric Daisy Carnival will be returning to Las Vegas Motor Speedway this October (22nd-24th) for its 25th anniversary. Maverick Helicopters allows guests to enter the 80,000 capacity stadium in style.

Guests can revel in the breath-taking aerial views of Las Vegas and EDC as they fly in a luxury helicopter to the Las Vegas Motor Speedway. Maverick Helicopters, EDC’s exclusive provider of helicopter transfers, delivers top-notch, VIP service for Headliners who like to arrive in style. Originating from Maverick’s private terminal, the 15-minute flight drops guests closer to the festival grounds than any other travel service.

The classic Las Vegas Night Flight over the Vegas strip provides spectacular views over iconic landmarks such as Bellagio, Caesars Palace, the Eiffel Tower and the brand new Allegiant Stadium, home to the Las Vegas Raiders.

Possibly the most well-known and supported NFL team in the UK, the New England Patriots play their home games at the Gillette Stadium. Opened in 2002, the same year that the Patriots won their first Super Bowl, the stadium holds over 65,000 fans, of which the Patriots have never failed to fill a home game. Located at 1 Patriot Place, in Foxborough, the entrance to the Stadium features a New England staple – a lighthouse, and a bridge modelled on the Boston Longfellow Bridge. Visitors to the stadium can also tour the Patriots Hall of Fame, which is home to the team’s six Lombardi Trophies and other memorabilia.

The oldest active ballpark in the MLB is also located in Boston. Fenway Park is home to the Boston Red Sox, one of the oldest baseball teams in the MLB. Because of its age (the venue originally opened in 1912 before being rebuilt in 1934), the ballpark has lots of quirks that wouldn’t be replicated in modern venues. One example is the famous “Green Monster”, a 37-foot wall that is located to the left of the field. Because of its short proximity to the home plate, it provides a unique challenge for right-handed batsmen looking to score a home run. Initially, the wall was used for the scoreboard, then advertising, before finally being painted green in 1947. Tours go ahead daily, all-year round, even on game day, allowing guests to immerse themselves of all the action on game day.

Basketball and Ice Hockey fans get to share the experience of the TD Garden as the venue for their respective teams. As home of the Boston Celtics and Boston Bruins, the Garden is the most visited sports and entertainment arena in New England, with a total of 3.5 million visitors every year. For basketball fans, the fun in Massachusetts doesn’t end there, as the state is also home to the Naismith Memorial Basketball Hall of Fame. Based in Springfield, the “Birthplace of Basketball”, nearly 200,000 people visit the Hall of Fame museum each year to learn about the game, experience the interactive exhibits and test their skills on the Jerry Colangelo “Court of Dreams.”

For any tennis fan, a stop off in Newport, Rhode Island will take you by the International Tennis Hall of Fame. Located at the Newport Casino, it was the location of the first competition ever sanctioned by the United States Lawn Tennis Association. Now, the complex is home to a museum commemorating the legends of Tennis, and indoor coaching facility, and the famous grass courts that people associated with Newport.

Car racing is firmly rooted in North Carolina ever since the days of bootleggers and moonshine brewers souping up their cars to outrun the law – before then racing one another. Those days are gone, but the legacy remains at the Charlotte Motor Speedway, NASCAR Hall of Fame, racing schools and motorsports museums.

The Charlotte Motor Speedway is widely considered the home of NASCAR and it hosts the infamous Coca-Cola 600 race on Memorial Day weekend. 50,000 fans gather for an exhilarating day of burning rubber and tyre screeching as they witness 38 cars go head to head in 200 mile an hour duels. Plus, when it’s not race day, guests can visit the track as part of the Richard Petty Driving Experience and feel the adrenaline of being inside one of these supercars as they navigate the 1.5 mile course.

Nearby to the Speedway is where enthusiasts can find the NASCAR Hall of Fame,  a state-of-the-art facility honouring drivers who have shown exceptional skill at NASCAR driving, all-time great crew chiefs and owners, broadcasters and other major contributors to the competition. With over 50 interactive experiences, visitors can get behind the wheel of an iRacing simulator to race their favourite track or see if they have what it takes to make the team in the Pit Crew Challenge.

American football rivals NASCAR in this part of America and there are only a few teams bigger than the Carolina Panthers. The team play their home games at the Bank of America Stadium in front of 76,000 adoring fans. Incredibly, the Carolina Panthers offer stadium tours for just $5 which include viewing the luxury suites, press box and media space, visiting the team locker room and the field tunnel!

Walking down Nashville Broadway, it’s impossible to miss the majestic Nissan Stadium. Sitting on the banks of the Cumberland River, a stone’s throw from the honky tonks and live music hub of Nashville, the Nissan Stadium comes alive on Tennessee Titans gamedays. Opened in 1999 after the then Oilers relocated from Houston to Tennessee, the stadium is known for being one of the loudest venues in the NFL. It was also the location for one of the most famous plays in NFL history, the Music City Miracle. On the way to their only Super Bowl appearance, the Titans overcame the Buffalo Bills in a playoff game in front of a then-record crowd at the Stadium, by scoring a touchdown on a trick-play return from a kick-off with just seconds remaining in the game.

Bristol Motor Speedway is one of the most historic, iconic and challenging circuits on the NASCAR calendar. Billed as “The World’s Fastest Half-Mile”, the track features extraordinarily steep banking, resulting in speeds not usually seen at such short tracks, and also a lot of collisions. It’s the third-largest sports venue in America, with capacity of over 162,000 spectators. Therefore, it is also one of the loudest NASCAR tracks too. Visitors can also camp at the facility, so are able to immerse themselves fully into a race-weekend if they so choose.

So rich is the sporting heritage of Tennessee, that it has its own Hall of Fame, dedicated to Tennessee sports. Established in 1966, the hall was established to preserve the legacies of those that have contributed significantly to Tennessee sports lore, and the values of which they embraced. Currently, there are over 500 inductees into the Tennessee Sports Hall of Fame, from a range of disciplines including football, basketball, baseball, golf, soccer, rafting and track and field. The Hall is located within the downtown Nashville confines of the Bridgestone Arena, home of the NHL team, the Nashville Predators.