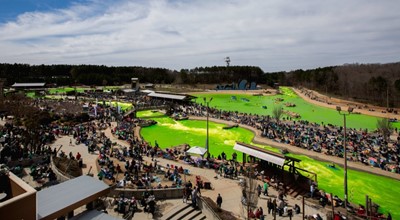 North Carolina really does go green on St. Patrick’s Day! In a normal year, the National Whitewater Center in Charlotte is visited by its resident leprechaun who transforms the river to green. This is all part of the Green River Revival Festival put on by the Center which also features rodeo rafting, competition sports and trail runs designed for the whole family. There is also live music and beer on site.

North Carolina has a long connection with the Irish. They were hugely influential as part of the Scots-Irish movement who settled in the mountains of western North Carolina and helped develop Bluegrass into what we know and love today. There is also a wide variety of Irish Celtic music across the state with jam sessions in Asheville, Waynesville, Raleigh, Greensboro and Charlotte.

There is good news for those in the UK, as the Carolina Irish Fest will be taking place virtually this year, meaning you can tune in from your living room. From 12am GMT, Kevin Tobin will be leading the celebrations of the Irish traditions with music, dance, story-telling, and more. This virtual event will feature musicians and dancers from around the world and fireside chats with cultural figures – the event will be in support of the Charlotte Irish American Center.

One man who will certainly be celebrating next week will be Raleigh’s Niall Hanley. Niall, who grew up in Ireland, moved over to North Carolina to start his own Irish pub. However, he went one step further when he opened up the Raleigh Beer Garden, an epicentre of beer featuring dozens of local brews and the world’s largest selection of draft beer. In 2015, he and the bar were awarded the Guinness World Record for most beers on tap at 397. Amazingly, he has gone on to triumph his own record with the Charlotte Beer Garden with 436 beers readily available!

Since the early wave of Irish immigrants, at the end of the 1700s, there has always been a significant Irish presence in New Orleans. So much so that the Irish have even influenced the local accent. First-time visitors may expect the city dialect to affect a Southern drawl, but really it’s more like an accent out of Brooklyn where many Irish and other European immigrants also settled.

Naturally, the New Orleans St. Patrick’s Day celebrations are energetic. The city (usually) enters a week-and-a-half of festivities and fun. Count on three parades and two legendary block parties that involve all sorts of merriment.

Most of the celebrations take place in the Irish Channel, an area near the Garden District. The annual St. Patrick’s Day Parade on the Sunday before St. Patrick’s Day rolls down the lower section of  Magazine Street and St. Charles Avenue. Marchers and riders in the parade will have plenty of green beads and doubloons and, also toss the makings of Irish stew. So be wary of onions, potatoes, heads of cabbage and carrots fly through the air!

St. Patrick’s Day festivities can be observed all over Louisiana and will be back to their dazzling best in 2022. The annual “Wearin’ of the Green” parade is one of Baton Rouge’s most acclaimed commemorations honouring the long-standing history of Irish Americans in the state capital. Put on your best green and get ready to celebrate!

In Lafayette, thousands gather the weekend before St. Patrick’s Day for the Celtic Bayou Festival.  The festival focuses on preserving and celebrating all aspects of Irish, Irish American and other Celtic cultures while instilling an appreciation of this heritage in current and future generations. An annual, family friendly event, Celtic Bayou Festival is held in the heart of Cajun country and is fun for both young and old!

Connecticut Irish-American Heritage Trail tells the moving history of the Irish Diaspora in Connecticut and encourages visitors to explore over one hundred historical sites and events related to Connecticut’s Irish population and its rich history.  The Irish experience has had a profound impact on Connecticut’s past, and its narrative spans all periods of the state’s history. The Greater Danbury St. Patrick’s Day Parade usually takes place the Sunday after St. Patrick’s Day, and was founded in 1999.

Portland’s annual St. Patrick’s Day parade is now going virtual. Usually, a parade marches down Commercial Street with hundreds of people celebrating. Instead, because of the pandemic, the virtual event will be livestreamed on March 14.

Irish Heritage Trail – Explore Boston and its surrounding neighborhoods as you experience nearly 300 years of Irish history. This self-guided tour begins at the Rose Kennedy Garden near the waterfront and ends at Fenway Park. Pick up free maps of the Irish Heritage Trail at the Visitor Center on Boston Common.

Join the Edward M. Kennedy Institute for the United States Senate, Consulate General of Ireland in Boston, and Embassy of Ireland, USA for a virtual 2021 St. Patrick’s Day celebration with Taoiseach Micheál Martin. The program will honor the 40th anniversary of the founding of the Friends of Ireland in Congress by Senator Edward M. Kennedy and others and celebrate the launch of “From Whence I Came: The Kennedy Legacy, Ireland and America,” a collection of essays edited by Brian Murphy and Donnacha Ó Beacháin.

The Black Rose – Located in the historic Faneuil Hall area of Boston, this Irish pub is celebrating its 36th birthday this year. With its authentic décor, live music seven nights a week, hearty food featuring traditional selections such as fish n’ chips, stews and corned beef, and of course, an endless supply Guinness, it’s no wonder this pub was awarded the ‘Best of Boston’ Irish Pub award!

The Burren – Named after a great rocky expanse in Ireland’s County Clare, The Burren is a Somerville favorite where people gather to enjoy a good drink, live traditional Irish music and the comfort of good company. As the name suggests, this pub captures the mythical nature of Ireland’s landscape with old world feel. Enjoy classic dishes such as Guinness beef stew, shepherd’s pie and bangers & mash while listening to the sounds of the Celtic.

Manchester, New Hampshire, turns green with Irish pride each year, first with the Shamrock Shuffle road race, and then with the main event — an action-packed parade featuring pipe and marching bands, plus numerous marching units. It’s the city’s largest community event of the year with, more than 70,000 attending and participating. The parade is taking a year off for 2021, but is looking to be back with a bang in 2022.

Newport celebrates Irish Heritage Month where scheduled events happen daily throughout March.  Cultural exchanges, food events, music and dancing are all part of the month-long heritage celebration. The St. Patrick’s Day Parade is usually the highlight of March in Newport drawing thousands of enthusiastic visitors. Newport’s sister city is Kinsale in Ireland and the two cities exchange cultural experience throughout the year especially during March.

The Newport Mansions were staffed by Irish servants during the gilded age and most of the home’s narratives include a detailed history. Many of Rhode Island’s neighbourhoods were built by the Irish immigrants who came to work in the textile industry beginning in the 19th century.

Every year, a big Irish parade takes place on Beale Street, Memphis. Tens of thousands of people flock to the famous street to take part in the festivities, all encouraged to don green and celebrate accordingly. Named for the late Beale Street restauranteur and Memphis’ “King of the Irish,” Thomas “Silky” Sullivan, the Beale Street parade is the largest St. Patrick’s Day observance in the Mid-South and the centrepiece of six days of events celebrating Irish traditions, heritage, and families in Memphis.

Visit Rock City’s annual Irish celebration and festival—Shamrock City! This premiere St. Patrick’s Day event in Chattanooga features Irish food, specialty beer from Chattanooga Brewing Company, pop-up Irish dancing performances, Suffolk sheep, a miniature Scottish Highland Cow, and fun for the whole family. For the event, the High Falls even get in the spirt of the occasion and flow green! Other celebrations include a hop on the St. Patrick’s Day Dinner train in Chattanooga for an Irish experience by rail. This trip includes a three-course dining experience with a choice of two craft beers on board our restored dining car. Trains depart from Grand Junction Station, traveling at a leisurely pace through portions of urban East Chattanooga before reversing direction and returning to Grand Junction.

With 2022 dates yet to be confirmed the, St. Patrick’s Irish Picnic and Homecoming in McEwen is an annual family event attended by locals and visitors for over 150 years. Over 20,000 people come from near and far to enjoy its famous pork and chicken barbecue and family-friendly activities. Hosted by members of St. Patrick Church, St. Patrick’s School and the friends of the Parish, the Irish Picnic is always held the last Friday and Saturday in July. Some 21,000 pounds of barbecue pork will be slow cooked over hickory bark coals during a 24-hour laborious process, ready for hungry lunch crowds Saturday morning.