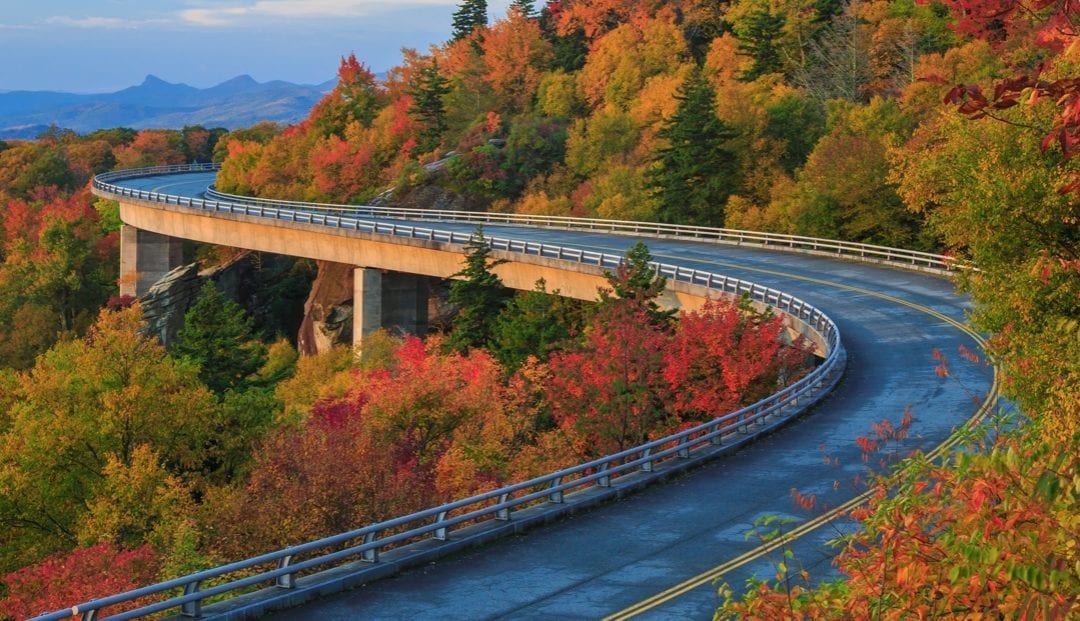 The city break has been much missed over lockdown, we have longed for the mix of cultural attractions, eclectic dining choices and new neighbourhoods to explore.  As the world opens up and people start to plan their next adventures, its time to consider visiting those cities that are slightly off-piste. Nowhere does hidden gem cities like the US, with plenty of smaller communities providing the beating heart to the American way of life. Here are our top picks for a lesser-known getaway or an overnight stop on a USA road trip for the Autumn:

Brevard serves as basecamp for recreation in Transylvania County, one of five North American destinations on Green Destinations’ current Top 100 list — and the only one on the East Coast. The designation is the result of Transylvania Always, a tourism authority-driven initiative with involvement from about 30 regional conservation and cultural organisations.

Brevard charms and attracts travellers to the Blue Ridge Mountains. Wander through the compact downtown to find 185 King Street, a lively music venue with outdoor space for pitching horseshoes. The Co-Ed Theater, a classic movie house, screens first-run films. Head to breweries, taprooms or a 1941 soda shop, fine dining and everything in between. Galleries and indie shops add to the distinctive character (try D.D. Bullwinkel’s for outdoor gear and O.P. Taylor’s for toys), and to seal the case for a unique place are the resident white squirrels, whose lineage is traced to a pair of escapees from a 1949 carnival. The Brevard Music Center offers al fresco performances at the edge of Pisgah National Forest during the summer.

Just beyond the town limits, mountain bike trails at Pisgah and DuPont State Recreational Forest serve as a training ground for Olympians and other competitive cyclists who come for the Pisgah Stage Race and other events. Rivers and streams feed 250 waterfalls, some reached by hiking trail and others by merely pulling into a parking area. Among the most popular cascades is a 60-foot natural waterslide called Sliding Rock, which has lifeguards on duty in summer. Other recreation options include paddling, flyfishing and even river snorkeling while true adventurers can climb the face of Looking Glass Rock. Whether embarking on independent adventures or taking advantage of local guide services, travellers can connect to the community of like-minded outdoor lovers at the Hub & Pisgah Tavern, Headwaters Outfitters taproom and gathering spots back in Brevard.

To make a barbecue lover salivate, just say Lexington. The city lends its name to the barbecue style of smoking pork shoulders low and slow over hickory and oak coals, then serving the chewy slices or strands with a tomato-laced vinegar dip. In 2019, Lexington celebrated the centennial of Lexington’s first barbecue “restaurant,” a tent pitched in the middle of town by pioneering pitmaster Sid Weaver.

Today, Lexington is the home of 15 barbecue restaurants, including Lexington Barbecue, which the James Beard Foundation honored as an America’s Classic. October brings the 35th edition of Lexington’s Barbecue Festival, a one-day event where 15,000 pounds of pork are served to 160,000 attendees.

There’s more to Lexington than barbecue. Shops in its vital downtown include Conrad & Hinkle, a mark that also celebrates its centennial this year (the pimento cheese is legendary). The town also includes the Bob Timberlake Gallery & Museum, home base for the celebrated artist-designer who grew up here; and Childress Vineyards, a destination winery owned by NASCAR team owner Richard Childress. www.visitlexingtonnc.com

Tennessee has developed a reputation for its charming and fun small towns. Bristol, straddling both sides of the Tennessee-Virginia state line, is a great example.

Perhaps best known for the legendary NASCAR short track Bristol Motor Speedway, Bristol has come into its own by embracing its rich vein of musical heritage, localized entrepreneurial and artistic talents, a collective eye for revitalization and an undeniably beautiful natural setting.

You’ll want to be quick and charge into all the fun in Chattanooga. Maybe not as quick as the otters sliding down the River Otter Falls at the Tennessee Aquarium, but really quick to experience the attractions, entertainment and fun things to do in Chattanooga. Outdoor adventure, family fun parks, fine dining and sports are packaged together at this easy-to-reach destination.

To satisfy your sweet tooth, try an original MoonPie at the MoonPie General Store. Or, once the sun goes down, scare yourself silly on a night-time haunted tour through downtown with Chattanooga Ghost Tours.

Stroll the quaint downtown streets of Breaux Bridge, and you’ll find yourself transported back to a time before life became hectic. Breaux Bridge is the gateway to authentic Cajun culture in south Louisiana. Discover traditional Cajun and funky Zydeco music, world-famous cuisine, and a rich history. Breaux Bridge is home of the world famous Breaux Bridge Crawfish Festival every May, where thousands converge on the little city to pay homage to Louisiana’s famous crustacean.

Fresh air is good for the soul, and no air is fresher than the air in the swamps or along the Bayou Teche.  Lake Martin is the perfect place to go kayaking and experience the great outdoors.  Bring binoculars to bird watch or search for alligators basking in the sun. Breaux is also home to lovely antique shops and boutiques making it a perfect weekend getaway. Take a leisurely stroll through the downtown area and then get ready to Cajun two-step the night away.

Pronounced Nack-a-tish, this city is the original French colony in Louisiana and the oldest settlement in the Louisiana Purchase.  Established in 1714, Natchitoches, retains its European flavour through its architecture, heritage and lifestyle.

At the heart of Natchitoches lies the National Historic Landmark District, a 33-block area that includes many historic homes and churches, serves as a shopping and dining paradise and a bed & breakfast lover’s dream. Explore on your own or enjoy a free guided tour.  The 1989 movie Steel Magnolias was both written and filmed in Natchitoches and many of the filming sites can be visited.  Sports fans can enjoy the Louisiana Sports Hall of Fame.

For foodies, it’s all about the meat pie, a fried pie filled with beef and pork and seasonings. Lasyone’s Meat Pie Restaurant is one place to go to get your fix. James Lasyone didn’t invent the dish, but he sure helped make it famous. Now, his daughters Angela Lasyone and Tina Lasyone-Smith run the family restaurant, where they hand make between 400 and 1,000 pies each day. The delicious pastry is one of Louisiana’s official state foods and it’s celebrated in September of each year at the Natchitoches Meat Pie Festival.

Located in the Berkshire Mountains, Lenox is best known for being a charming summer resort. It is the summer home of the Boston Symphony Orchestra and the Tanglewood Music Festival, which is running through to August 16 2021. In addition to its cultural district, galleries and restaurants, the natural beauty of Lenox also offers itself to many year-round sports.

If you’d like to take a step back in time, Lenox is also the home to The Mount (past residence of the noted American author, Edith Warton), and the Ventfort Hall Mansion and the Gilded Age Museum.

Tiverton, Rhode Island was a very important place before and during the Revolutionary War. For a large part of the war, it was a refuge for American’s fleeing the British occupation of Rhode Island (then known as Aquidneck Island). It also became a focal point for gathering colonialists to drive out the British, which they eventually managed in 1780. It has historical artifacts and commemorations recognising the role it played in US history.

In the modern day, many visitors come for its nearby seaside beauty (Sachuest Point National Wildlife Refuge, for example), and Colt State Park. Tiverton also has many family-oriented activities such as Rail Explorers, Cliff Walk, and the nearby attractions in Newport, the Newport Car Museum and the Firehouse Theater.

The quaint seaside village of Mystic is rich with maritime history. In the 1700s Mystic was a significant Connecticut seaport with more than 600 ships.

Today you can explore that history at the Mystic Seaport Museum. The museum has everything from a planetarium to a re-created 19th century seafaring town and shipyard, and visitors can climb aboard the Charles W. Morgan (the world’s last wooden whaleship).

Visitors to Mystic can also have a great time at the Mystic Aquarium, (where you can see a Beluga whale!) The aquarium has some great interactive shows, such as Shark Encounters, the Ray Touch (stingray) pool, and Scales & Tails, where those brave enough can get to pet a baby alligator. And last but not least, don’t miss the California Sea Lion Show at the Foxwoods Marine Theater.

Located in the state’s midcoast region, the historic town of Wiscasset is said to be the prettiest village in Maine. Originally a Native American settlement, Wiscasset was first settled by European immigrants in 1663.

This seaport town remains quaint and full of historical charm, with famous architectural landmarks such as the Nickels-Sortwell House, which boasts federal-style architectural design such as an elliptical stairway and an oval skylight.

Downtown you will find restaurants, shops and more historical attractions, such as the 1812 Jail, and the Wiscasset General Store.

Wiscasset may also be the perfect place to sample lobster in Maine. It is home of Red’s Eats, one of Maine’s best lobster shacks.

Hanover is a town located on the Connecticut River, and home to one of the oldest institutes of higher education in the country, the Ivy League Dartmouth College and hospital.

Top sights include the hands-on Montshire Museum of Science, which is actually located just over the Connecticut River in Norwich, Vermont, the beautiful and serene Mascoma Lake, Moose Mountain, which features an 8-mile-long ridge, Briggs Opera House which has been putting performances on since 1890 and Occom Pond, where you can spend a fun-filled day ice skating.